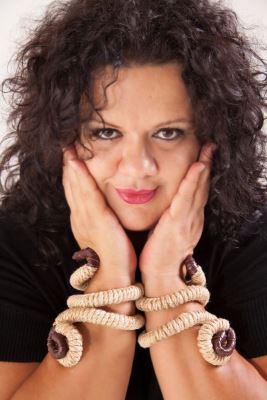 Over time, however, I tried to give an idea of this technique more focused on art and in an unconventional way, out of the domination’s schema. For this reason I approached more and more seemingly distant worlds: body art, performance, painting, fashion … The only common element, my true fetish, are the ropes, preferably jute-made. I work with them, sliding them gently onto skin or objects, to model new figures.

The body Stylist and poetess of creation DolcissimaBastarda expresses herself through the ancient art of Bondage. She lets the ropes run into her hands with ability and knowledge to cover the nude body up with Shibary knots and American interlacements, giving shape at a real human “sculpture”. This masterpiece keeps the eyes and the soul of the man, his essence, while the body becomes harp, or else fire air water or earth, it becomes an object with its own soul; the staples, being interlaced slowly, become hot caresses, effusions of love that in the end are one and the same with the body they cover and change…….

It is possible to communicate with one’s own partner or an audience in a performance through the action of binding a body or the choice of being bind; both are commonly considered among the hardest sexual perversions. The cultural origin of this form of expression is ancient, and its first meaning has changed in the passing time but it is necessary to assert it again. You are warned: no tike pornography, no kind of humiliation, no kind of masochism or sadism are to be considered part or expression of “real” Bondage, the one that inspires DolcissimaBastarda. Any use of the kind is to be considered dangerous and contrasting with  the real reason for which the Bondage action is made.